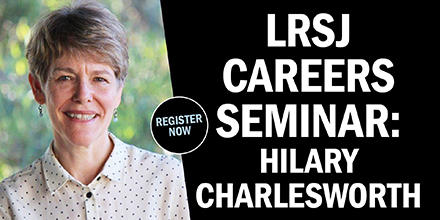 ANU Law Reform and Social Justice (LRSJ) will be holding a light lunch for students to meet and chat with Professor Hilary Charlesworth, one of the world’s leading advocates for international human rights standards.

Professor Hilary Charlesworth will talk about her career path and share her thoughts on using the law as a tool to advocate for human rights.

This seminar is open to all current ANU Law and RegNet students. Attendance is free but spaces are limited – register now!

This seminar is part of the LRSJ Justice Careers project that runs regular seminars with practitioners and advocates in the field to talk about careers.